Ainur Abdina is making the impossible possible while successfully navigating her company through the pandemic. The entrepreneur from Kazakhstan acquired the necessary confidence and know-how in the Manager Training Programme.

What starts out as a detective story is actually one of Ainur Abdinas’ unusual jobs during the coronavirus pandemic. In June 2020, she recalls, she got a phone call. Five containers of high-quality systems for a solar power project had vanished without a trace, somewhere on their way from China to Kazakhstan. 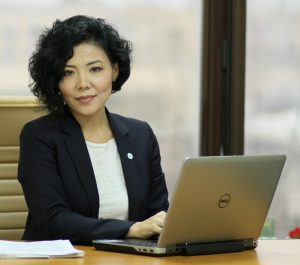 “Find the containers” was the urgent request from the man on the other end of the line. She had just three days to locate the containers for a German company and then transport them to Kazakhstan. The response she heard the most was the word “impossible”, says Abdina. “It was a crazy time, and the rules and regulations were constantly changing. Nobody really knew what was going on, and the situation at the borders was difficult to assess,” remarks the logistics and customs expert. Despite the difficult circumstances, she finally found the containers at the Chinese border and managed to get them to their destination within the allotted time. When a delegation of investors arrived a short time later, the systems were already installed. The project had been saved, the customer was grateful, and Abdina was exhausted but satisfied.

The Manager Training Programme Planted the Seeds of Success

Ainur Abdina doesn’t hesitate when asked about where she found the confidence to tackle projects like this one. The Manager Training Programme planted the seeds for it, she says. “In Germany I saw that I can become an entrepreneur myself. That was the most valuable realisation,” she remarks.
This confidence led her on a career path to becoming the managing director of her own company.

From Teacher to Entrepreneur

Ainur Abdina was 27 when she attended the Programme. She had just quit her job as a German teacher in the province of Qostanai to start a career as a sales manager in the metropolis of Almaty. In Germany she had intended to acquire “only” the necessary skills for her new career path. But in addition to the intensive training units, she got a lot more. “The Programme not only gave me knowledge, it also took the blinders from my eyes,” she says. In the years to come, a fast-moving career path was awaiting her. After positions in various companies and marketing studies at the German-Kazakh university, she was recommended in 2011 to join C. Spaarmann Logistics GmbH, a logistics company in Brandenburg that specialised in Eastern European markets. She became the managing director in Kazakhstan and expanded business there. In 2019 she took an opportunity to become the proprietor of the affiliate there. “I started small at Spaarmann, with one computer and one coworker,” she remembers. In the meantime she now is responsible for the entire company with three branches and all of their employees. Her clients include famous companies from Germany and other countries.

Cooperation with the German-Kazakh University

Ainur Abdina has maintained ties to her university after her marketing studies. She accepted interns at her company and has held lectures there for several years. Her topic is “Transport and Customs from A to Z”. She loves having this return to academia, as she had taught German for many years at the university in her hometown. She does this side job without a fee: it is simply her wish to pass on her knowledge, she says.

When Abdina took over the company in 2019, she did not yet know that a major challenge would be awaiting her in the form of the coronavirus pandemic. Luckily, she made the right adjustments in time. “We were able to go remote within 24 hours,” she says. Abdina had her own software programmed for processing orders as a cloud solution, which was finished just before the pandemic broke out. With it, all of the employees could switch to working remotely within one day.
In addition to the ongoing orders, Abdina succeeded in generating new business as well. Many shipping agents in Kazakhstan were overwhelmed by the crisis. Abdina was able to get goods that were stuck in customers released for a large German industrial company, for instance. She was especially happy about the new customer she was able to acquire. She had been trying for years to win over the customer. But now citing the crisis she was able to show what she is capable of – even as a mother of two children who was especially affected by the lockdown measures. In addition to her full-time job, she looked after her one-year-old daughter and helped her seven-year-old daughter with schoolwork. She still managed to be there to help her employees and customers. In her free time she relaxes by going swimming and doing yoga. She also finds downtime in handicrafts: creating images in wool and pursuing the traditional art of crochet.