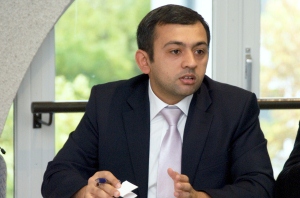 Baku has been associated with oil and gas for centuries, but the strong coastal winds that whip the metropolis on the Caspian Sea have also lent it the name the “windy city”. With this in mind, Caspian Technology Company (CTC) launched the first wind power project in Azerbaijan, working closely with Berlin-based companies on the co-ordination of project financing and the supply of turnkey systems from a Danish wind power station manufacturer.

Even before his stay in Germany Faig Mamedov already knew that he would begin working for CTC on his return. He therefore used his visit to prepare himself for the tasks ahead. His study programme included time management, project management, financing, and German business culture. Having completed his BMWi Manager Training Programme, Mamedov stayed in Berlin to work with his German project partners on the financing model for CTC’s planned projects.

Having got two wind farms in the Azerbaijani city of Yeni Yashma and a training centre close to Sumgait up and running, CTC is already planning another venture. This one will be based in Shurabad, some 50 kilometres north of Baku, and will comprise 16 wind turbines with a total output of 48 megawatts, which is enough to supply a town of 2,000 homes with electricity.

“We want to promote both wind power and also solar energy in our country, so we have installed eleven solar cells on the roof of the science academy’s physics institute, which we use to illuminate its façade. We want to inspire people, and anticipate further solar projects in the near future,” the successful manager reveals.

Mamedov has the following advice for future participants: “Never rest on your laurels. Be curious, do not be scared to ask questions and always think positive.”