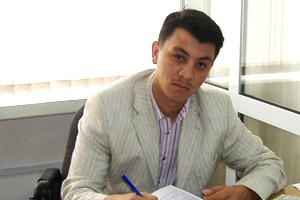 Dishold Hudayberdiev is assistant to the managing director of General Motors Uzbekistan, which belongs to the Uzbek trade association, Uzavtoprom. All manufacturers, suppliers, importers and exporters active in the automotive industry belong to Uzavtoprom, which – among other things – co-ordinates a series of economic and social projects that experienced General Motors Uzbekistan employees are expected to implement.

That being the case, Hudayberdiev was made responsible for the equipment and import contracts for the construction of the new polytechnic university in Tashkent. He therefore already had an exact idea of the contacts he wished to establish through his participation in the BMWi Manager Training Programme, and arrived at the selection interviews with a list of equipment and materials he wanted to purchase in Germany for the new building.

During the four weeks of interactive and practice-oriented training, Hudayberdiev showed himself to be one of the most active participants: he asked questions, actively participated in experience exchanges, and used practically every minute. And it wasn’t long before he was able to reap the rewards of his efforts: “We concluded several agreements with German companies, which have since been fully implemented – in terms of payment, delivery and installation.” The purchases include two lifts, 200 computers and laboratory equipment.

The new polytechnic university opened its doors to students on 1 September 2010, just in time for the new semester. Hudayberdiev wants to continue working, even more closely, with German companies in the future. He is full of praise for what he describes as their “quality and reliability in partnership relations.” That being so, his next order for a mechatronics training laboratory also went to a German company.

Hudayberdiev was particularly keen to acquire new management skills. “The most important experience that I was able to gain in Germany relates to the efficient use of working hours and quality management for the production process.”