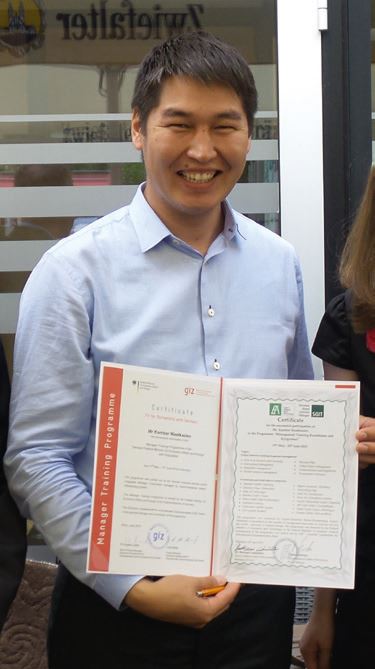 Abbada Company LLC operates mainly in the cultivation and processing of beans and fruit. Its founder, Kambar Maatkaziev, participated in the MP in 2015. He regards Germany as the gateway to the European markets, which he wants to supply. And he appreciates the highly developed German automation technology with the aid of which he is equipping his company for the future.

In the past, 20 workers did this work by hand’, says Kambar Maatka¬ziev, referring to the new optical sorting machine for kidney beans. The young entrepreneur bought the equipment, which uses camera technology to sort the beans according to their colour, during his training in Germany. It comes from Bühler AG, an internationally operating equipment manufacturer and hidden champion of the industry. ‘My workers used to sort less than a tonne of beans in an hour. The machine manages five times that amount’, says Maatkaziev.

With this purchase, the 30-year-old head of the company laid the foundation for the automation of his operations. His next step will be the purchase of a cleaning system from Bühler – in time for the next harvest season. With this machinery, stones and unripe beans can be picked out and the beans sorted according to size. Then his company will be well equipped to meet the high quality standards of the European market. He has already signed a supply contract with the Hamburg trading company Hartmann & Popp to the value of 500,000 euros for the next harvest. ‘Up to now, we have always supplied Hartmann via a middleman in Turkey, who sorted and cleaned our goods. Now we export directly and earn more with our beans’, says Maatkaziev.

The company also has fruit plantations: apples and pears, among other things, thrive in Issyk Kul, the region bordering China, and will soon be harvested with equipment for picking fruit manufactured by the company Bäuerle Landtechnik. This will also lead to savings in harvesting costs. Switching to automated production step by step. ‘We visited a large number of companies in Germany. No matter where we were, the automation technology always impressed me strongly’, says Maatkaziev. Abbada also rents out and sells machinery for farming; this makes up about 30 per cent of the company’s business. Maatkaziev has recently signed a distribution partnership agreement with Bühler AG. ‘I take a close look to see what machinery our farmers need and purchase accordingly.’

Through the modernisation, Maatkaziev is gaining access to new markets. In the past, he mainly exported to post Soviet countries and Eastern Europe. Now his products are suitable for the EU market. To this end, he is currently working on the required certifications. After Germany, he wants to also supply France and double his exports to the EU. He plans to achieve two-to three-fold increases in his annual turnover and reach up to six million euros. ‘I have only just started the modernisation, and I want to achieve the maximum’, he says.