The largest closed-loop poultry farm in Turkmenistan is developing with the support of German technology.

An ultra-modern facility for the production of poultry meat is being built in the Gökdepe District, roughly 65 kilometres from the Turkmen capital Ashgabat. The family-run business, Maksada Okgunly, is investing nine million euros in this innovative project, which is ground-breaking for agricultural development in Turkmenistan. German technology is also playing a significant role: all the technology for the farm facility is from Germany.

“I wanted equipment from Germany because it is the best. And because the businesses don’t only supply the technology, but also provide support and service”, says Maksat Ibragimov, who runs Maksada Okgunly with his sister. The two currently have visitors from Germany: experts from Prüllage Systeme GmbH, who will be accompanying the installation and the putting into service of the new housing for rearing turkeys as well as training the personnel. The German family business in Lower Saxony, run by the three brothers Heinz, Josef and Ludger Prüllage, supplied all of the equipment for a total of 22 new turkey houses including a feed plant, a ventilation and heating system and automation technology. 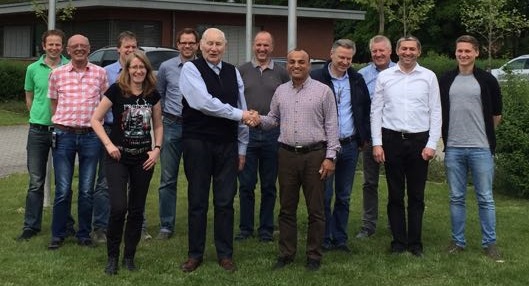 Maksat Ibragimow with Karl-Heinz Witte, Director of Witte Anlagenbau GmbH & Co. KG, and representatives of the firm in Germany

The whole farm complex is built as a closed-loop production system. It includes a hatchery, three houses for rearing chickens and 19 poultry houses. In addition, the farm has its own feed factory, made by K.H. Witte Anlagenbau GmbH & Co. KG, another German firm. Moreover, a slaughterhouse with a meat processing unit is in the planning stage, as is a plant for processing and using organic waste; both plants are to be supplied by German enterprises. The new factory complex being built on the firm’s 30-hectare premises – equivalent in size to 42 football pitches – is intended to go into operation at the end of 2019. Ibragimov will then produce 4,800 tonnes of turkey meat a year. The annual capacity should reach 6,400 tonnes by 2020 and will then be expanded to 30,000 tonnes. With that, Maksada Okgunly would supply about ten per cent of the country’s total meat production, which is currently approximately 300,000 tonnes a year.

Feed Factory Made in Germany

Ibragimov will be producing his own feed in the future. He grows his own grain on an area of 230 hectares for this purpose. The grain ends up in the new mixed feed factory supplied by Witte, where it is used to make turkey feed. The new plant from Germany can produce five tonnes an hour and up to 43,000 tonnes a year. The new production line also includes storage silos and buildings for up to 24,000 tonnes of grain and the controls are fully automated. The agricultural area and the premises have been made available to Ibragimov free of charge after his plans won a call for proposal, despite tough competition, in 2015. As a result of the call for proposal, the Turkmen government also granted him a lowinterest loan of nine million euros. The government supports the development of private-sector industrial agriculture with these schemes in order to drive the diversification of the economy forward. Ibragimov has already invested about two million euros in his new German technology.

Big Plans for the Future

“Now we can do everything ourselves, from rearing to the processing of the poultry meat. So far, this has not been the case in Turkmenistan”, says the head of the firm, who participated in the Manager Training Programme (MP) at the end of 2017. But that is not enough for the committed 37-yearold entrepreneur; his visions go further than that. He wants to become even more autonomous and continue to invest. He also wants to produce eggs for breeding from 2020 onwards, so that he no longer needs to buy them. He intends to purchase his own parent stock for this purpose. And he plans to order it from Kartzfehn Märkische Puten GmbH, the largest German turkey breeder. Up to now, he has only bought hatching eggs from this enterprise. He also wants to expand his facilities to produce duck and goose meat.

Ibragimov has always been open to innovations and prepared to take risks. In 2013, he was the first to import turkey eggs, with which he laid the foundation for the industrial production of turkey meat in Turkmenistan. Originally, the ambitious entrepreneur was not a businessman or manager but a philologist. He says that is why he benefited particularly from the MP. The Programme provided him with the valuable management know-how he needed in order to expand his enterprise, which currently has 70 employees.